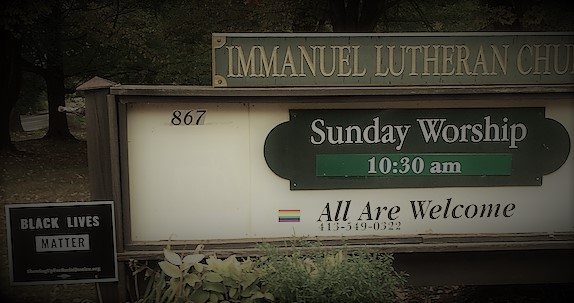 Last spring, Immanuel Lutheran Church, Amherst, MA, (Congregation-based campus ministry for the University of Massachusetts) affiliated with the local sanctuary movement in Western Massachusetts through the Pioneer Valley Worker Center. We had been learning about the history of the movement, watching the news of travel bans, refugee restrictions, and the rise of unprioritized immigration enforcement, and discussing how we could help. When we formed a team and voted to affiliate, we really had no idea what direction it would take. We were in a time of active waiting (an out-of-season advent, perhaps?) trying to discern how best to use our ready resources.

One unexpected partnership came over the summer with the international graduate students and their families, many of whom live down the street from our church. Graduate students and their families often struggle with food insecurity, especially those who have picked up their lives to move here from another country to study, since spouses often can’t get work visas. The problem was exacerbated this summer when many of the international students would have returned to their home countries to earn money for the next year. Because of fears about travel restrictions many of them were afraid they might not get back into the US if they left, but they are unable to work in this country. Certain cultural barriers also make accessing some of the local services difficult.

We formed a coalition with the Graduate Women in Science and the Graduate Student Senate to host two dinners over the summer including activities for kids and adults. Two meals doesn’t solve the food insecurity problem, but our hope was that it was a step in developing community, trust, and relationships as a foundation for more projects. Between the two dinners we served nearly 200 people from more than 17 countries. We are in the process of creating a cookbook with some of the participants in the dinners to raise additional funds to assist families in need, while efforts to work with the university continue. All of this has been directed by the students with help and support from our congregation.  We at Immanuel are also continuing our work with community partners to find ways to make access to food easier for everyone, including this particular population.

While all this was taking place, we still weren’t sure how we could help undocumented individuals – another group we were very concerned about. Restrictions from the university made it difficult to connect with undocumented students, and our local geography made connecting with others in the area challenging, too. But in October, with relatively short notice, one of our ecumenical partners, First Congregational Church (UCC) of Amherst, took in Lucio Perez, an undocumented Guatemalan man seeking sanctuary. Because we had done the work in the spring to prioritize working with immigrants and refugees and to make a firm commitment to the sanctuary movement as a congregation, we were ready to jump in to help.

We have provided meals on a rotating basis with other faith communities, provided volunteers to be a 24/7 onsite presence, contributed money to the church’s costs and to Lucio’s family, and written letters of support for his appeal to the Board of Immigration Appeals. This movement and his situation are evolving and we are trying to stay on top of the best ways to help both him and the entire community of undocumented neighbors here in Massachusetts and across the country.