Love Listens and Testifies to the Truth

In July of 2018 I had a lunch meeting that shifted the way I do ministry. While attending the annual conference for the National Association of Student Affairs Professionals (NASAP), I met one of the senior directors for student affairs at The Ohio State University. We scheduled a lunch meeting the following week. Towards the end of lunch, I asked her, “In your twenty-five years working in student affairs, what is the biggest change you have seen over that time?” Her answer came quickly. She said, “Twenty-five years ago, we weren’t even discussing, much less responding to in any significant way, anxiety and depression within the student body.”

“Today,” she continued, “student mental health drives much of what we do. This year alone, 60% of incoming freshmen are clinically diagnosed and medicated for anxiety and depression.”

I had another meeting two hours later. This meeting was with other college ministry leaders at Ohio State. The group had invited a “missions” expert to come in and talk to us. He was part of a national organization that had strategically targeted Ohio State as a presumed epicenter of revival and was bringing money to the table to do something that would catalyze mission. After a brief presentation he offered this solution: “We would like you all to be involved in a large catalyzing kingdom event. We will bring in a big-name Christian band, full staging set up and a speaker, and then we want you all to be available to wade into the crowd to talk with students, invite conversion and collect ‘connect-cards’ for further follow-up.”

On the surface, I had little problem with the plan. Large events continue to be the norm for this kind of thing. Plus, talking to students is what I do. However, I pressed the speaker and said, “I hear the solution you are offering, but I don’t know that we have yet discussed the fundamental problem we are trying to solve.” I relayed the information I had just heard from the student affairs professional and followed up, “If your organization is truly wanting to help and equip us to serve students, then I recommend you put your resources into hiring a mental health professional to come speak to campus ministry leaders in order to address ministry in the context of anxiety and depression.” They actually agreed!

A month later, we were in the meeting with the mental health professional.  I had three take-aways:

To this third point–and without sarcasm–one of the non-Lutheran campus ministers replied, “But we can’t reduce fear in our evangelistic efforts. If we do not discuss the fear of hell with them, we cannot convert them, and I’m not willing to compromise the truth.” I hadn’t considered that fear would be the only way to share the good news of Jesus and that without it, one would be compromising the truth.

In his commentary on the book of Romans, Martin Luther discusses the concept of the “creature waiting” in Romans  8. He writes in response to those who merely want to philosophize the faith, “but in an entirely new and marvelous theological word [the apostle Paul] speaks of the ‘expectation of the creation,’ so that because his soul can hear the creation waiting, he no longer directs his attention to or inquires about the creation itself, but rather to what it is awaiting… Therefore you will be the best philosophers and the best explorers of the nature of things if you will learn from the apostle to consider the creation as it waits, groans, and travails.” (See Martin Luther, Lectures on Romans, in Luther’s Works vol. 25, 361.)

Luther continues describing creation in more personal terms, that within each of us is a creature that waits and is in travail. This ‘creature’ within each of us yearns to be known, to be seen and heard, to be deeply listened to and attended to, but often full of shame and fear is too scared to come out from behind the masks we create for ourselves. Is the church willing to be truly attentive to the ‘creature waiting?’ And how might Luther suggest we evangelise into this reality that is still present today, perhaps even more so?

In the Smalcald Articles, Luther discusses five ways that one can receive the Gospel. Beyond the proclaimed word where one hears the forgiveness of sins, baptism, the Eucharist and the power of the keys (the binding of loosing of sin, confession and absolution), one also receives the Gospel through mutual conversation and consolation. After all, it was Jesus who notably in the Gospels asks 307 questions, was asked 183 questions and only directly answers 8 questions. Jesus and the Reformers model listening, mutuality, conversation and consolation as a roadmap of evangelism for us to follow. Some of these evagelistic moments happen within the church building, but others can be done beyond it.

What shifts have we made within our college ministry building and outside of it? How do we attend to the ‘creature waiting’ in a Lutheran way that is evangelistic? First, we have doubled down on one-on-one mutual conversations of consolation with students. We have trained our staff and students in active listening techniques. This was also mirrored in our worship gathering, where we pause after the sermon for contemplation and conversation in response to the Word.

However, nearly every week, our large worship gathering still involves intense and energetic music, dancing, testimonial sharing, and often sweat! While we still do this, we have begun to balance our large group gatherings with other more subdued options. Throughout a given month we have added worship experiences that center on more contemplative and quiet practices. Additionally, we have a space adjacent to our sanctuary, where students with ADHD or those with high anxiety can opt for a quieter and more reflective seating area – still with the community, but with some distance from the epicenter of the action.

But the question remains, how does one do evangelism without fear? Well, it’s not that hard actually. Most of our evangelism efforts happen naturally through conversation, curiosity about the person, finding ways to serve students, and meeting people by word of mouth and friend networks. Again we just follow what has been modeled for us by Jesus, the Apostle Paul, and the Reformers. We listen and we testify to the truth in a way that is reflective of our context. 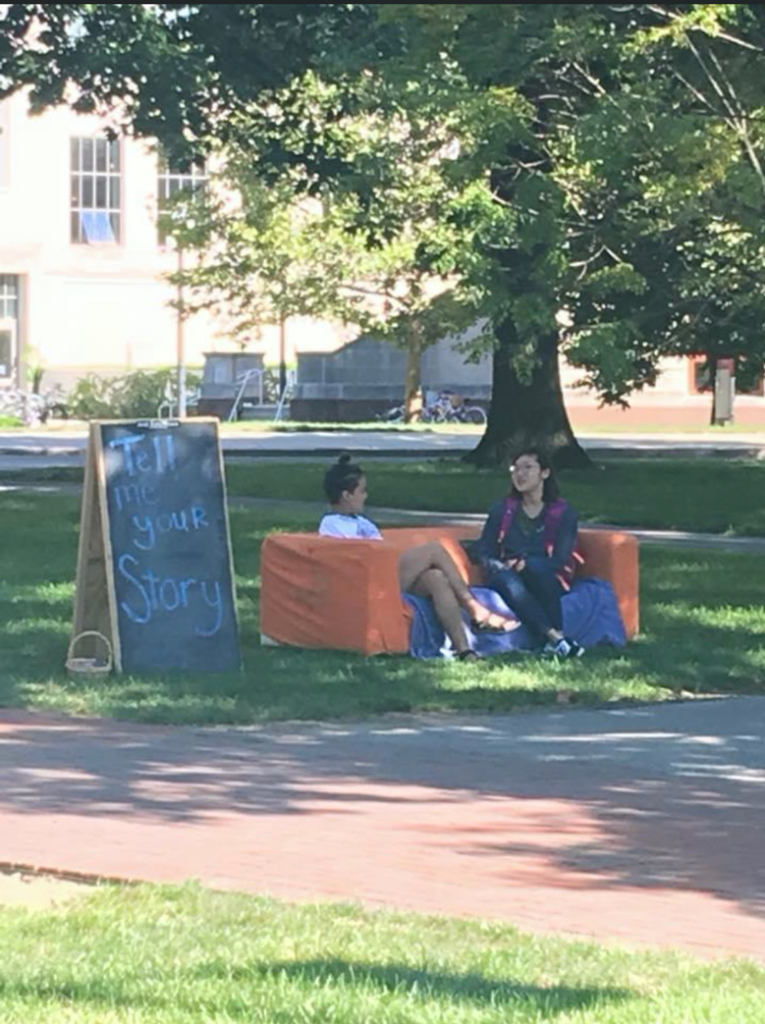 Students talk while seated on the “Orange couch” in the Oval at The Ohio State University.

As a campus ministry it is important to have some signature ministries that put us at the heart of campus. For this we primarily do two things, one old (it predates me as pastor of Jacob’s Porch) and one new. The first is a listening post. We have a beat-up old couch affixed with wheels that we push out to ‘the oval’ at the center of campus with a sign next to it that says ‘tell me your story’. We simply sit there and listen to people. The couch is never empty when we are out there. The point is not to bait and switch students, meaning that we are only listening to them in order to get them to do something, like joining our ministry. That would be disingenuous and therefore bad news instead of good news. We listen, ask questions and sometimes pray with them. We believe that love listens.

Lastly, we want students to know that whoever they are and whatever choices they have made, that they are seen and known for who they are, as beloved ones made in the image of God. So, this fall we will be wheeling out onto campus a giant icon. (See the featured image at the top of this post.) Maybe you’ve seen one before such as a gold leaf painting that portrays a saint, often with a halo around their head. Except ours will have no pre-painted saint on the icon. In the middle of the halo will be an empty space for the student to place themselves. They can take a picture as we testify to the truth, that they too are an icon (image) of God. For love listens and in Christ’s name testifies to the truth of who we are. As Lutherans, this is our way.

Grant Eckhart is the Campus Pastor at Jacob’s Porch Lutheran Campus Ministry at The Ohio State University in Columbus, Ohio.