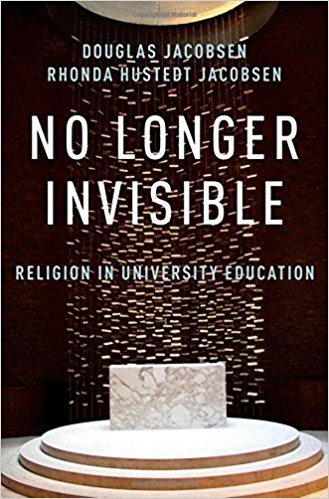 This review is part of a series of book reviews provided by campus pastors throughout the LuMin network! It is part of the ongoing research initiative of Lutheran Campus Ministries. You can learn more about the key literature in the research team’s LITERATURE REVIEW! 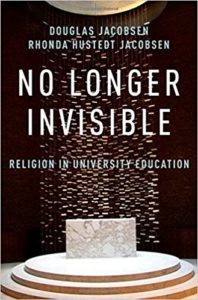 No Longer Invisible offers more than a helpful review of the history of religion within higher education circles. Throughout the book, Douglas Jacobsen and Rhonda Hustedt Jacobsen argue that spirituality demands consideration from faculty and administrators. This doesn’t mean that dogma ought be taught, but rather the spiritual dimensions of life ought not be anathema to academic conversation. As a campus minister, you’re likely convinced of this already. Yet, how the Jacobsens make this argument deserves your attention.

The Jacobsens first review three eras of collegiate paradigms: the Protestant Era (1636-1900CE), the Privatized Era (most of the 20th Century), and the Pluriform Era (late 20th century through today). In general, religion moved from a central place in the Protestant Era in the form of (primarily Protestant) Christianity to the marginalization from most universities’ curriculum and structure in the Privatized Era to, most recently, a renewed consideration as a crucial aspect of student wellness and, therefore, significant in order to provide the best possible education.

As we live in the relatively new Pluriform Era, the Jacobsens suggest six sites of engagement with corresponding questions to help us consider the importance of religion in today’s higher education paradigms.

In each chapter, the Jacobsens explore various perspectives before synthesizing their research and suggesting a way forward, all of which provides helpful fodder for considerations within our ministries.

Perhaps most interesting is the hinge upon which these two portions turn, which is the Jacobsens’ distinction between historic, public, and personal religion. Each site of engagement relates explicitly to at least one of these religious types. By historic religion, they mean the denominations and dogma from Vedanta Hinduism to Lutheran Christianity to Sufi Islam to indigenous religions across the globe. In contrast, public religion indicates the civic commitments and ideals present in national consciousness. Think of the American ideal of freedom, reverence of the flag, and sung commitment through the national anthem as signs of public religion. One’s personal religion is formed but not totally determined by the dominant historic and public religions in their environments. For instance, though I was raised as an American Lutheran, I choose not to pledge allegiance to a flag or sing our national anthem, which violates core ideals of our public religion. Simultaneously, you’ll find me at different times practicing yoga, reading the Apocrypha, and arguing that divinization deserves more attention within Lutheran theology, each of which has gotten me dirty looks at the very least from some of our Lutheran colleagues. These individual beliefs and practices constitute my personal religion, something that’s unique to me and yet resonates with many others outside of my historic and public religious tribes.

As I read this book, one question guided my thoughts throughout. From this wealth of research and wisdom, what learnings might benefit the LuMin community in particular?

If we truly live in an era of higher education that recognizes some value in spirituality on campus, then that allows us a level of assumed value within our institutions. This will look differently in each setting, but it should encourage us to look for those allies in the classroom and administration who value the presence of spirituality not just at college, but also within education. We may come to serve not as dogmatists, but as a type of trail guide that helps our universities navigate pluralism as insiders committed to the best for our students and our institutions.

The six sites of engagement provide a valuable tool for reflection for our boards, our ministries, and us. How versed we are as professionals in each area will have ramifications on the exposure our students receive. We may take these as guidance for where to seek continuing education in the coming years and what experts we invite to our regional retreats. We may also take these as programmatic suggestions for our ministries. If our students aren’t literate in the religions of other groups on our campus, we may address that through events of education and mutual sharing with those groups. We would do well to ask how our convictions shape our ministries and whether we’ve chosen the most helpful methods for our students.

Though the book addresses assumptions of universities about roles of religion, the mirror is easily and appropriately turned upon ourselves. How do we envision spirituality operating within our campus contexts? Our ministries may feel enclaved due to the marginalization of the 20th century, but those feelings may be promulgating a problem that no longer exists. In other words, we may find more acceptance across the spectrum of collegiate contexts, but must actually engage in those conversations to discover where the new boundaries lie.

Finally, in an era where all of us carry some kind of personal religion (for even committed atheists are formed by the cultural impact of historic and public religion), one powerful question to ask ourselves is this: what religion are we teaching? Sometimes, under the auspices of sharing our personal religious stories, do we indoctrinate others into our personal religious convictions? At our best, through historic, public, and private religious traditions, we may enable those under our care to open more authentically to the experience of God. However, without reflection, we may develop personality cults rather than students committed to the radical work of the Gospel.

No Longer Invisible is certainly worth your time, both to help you understand the religious landscape of contemporary collegiate campuses and to consider how you might best minister in that environment.