This review is part of a series of book reviews provided by campus pastors throughout the LuMin network! It is part of the ongoing research initiative of Lutheran Campus Ministries. You can learn more about the key literature in the research team’s LITERATURE REVIEW!

Book: Choosing our Religion: The Spiritual Life of America’s Nones, by Elizabeth Drescher 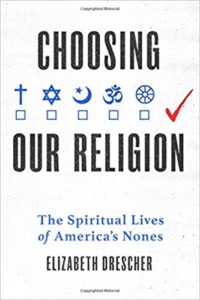 Over the past three decades the number of people who respond “none” to the question of their religious affiliation has grown rapidly. A Pew Research Center survey in 1990 indicated that only 9% of the American population identified as unaffiliated. By 2008, that number had almost doubled to 16%, and by 2015 “nones” proved to be the fastest growing element of the religious landscape in America as their numbers once again rose, even quicker than expected, to 23% of the total population. Elizabeth Drescher’s book, Choosing Our Religion, helps tell the stories behind these numbers through information gathered by surveys, email, and in-person conversations with the diverse group of people that make up America’s Nones.

Drescher’s book challenges the stereotypes about Nones that are often used when discussing this growing part of the population. Religious life, she suggests, like most of life, is not a strict binary of Somes and Nones, but contains a spectrum of belief systems and practices that are much more fluid than a survey can capture. There are people, for example, who might be members of religious communities and report themselves as affiliated, but actually be agnostic in their beliefs – such as the man in his 70‘s that she interviewed who went faithfully to church until his wife died because he had promised her that he would, or the young Jewish couple who joined a synagogue so their child could have a place to learn about their Jewish identity. And there are people who describe themselves as “none of the above” who believe in God, pray on a regular basis, practice rituals that connect them to a sense of the sacred, and go out into the world to serve through a sense of a deeper calling. There is the college student she interviewed who had to attend a Quaker worship for a class, found he liked the peacefulness, and kept returning even though he did not want to identify himself as a Quaker or a Christian. And there are self-identified Christians like me who, in addition to going to church, find spiritual grounding and community through the non-Christian practices of yoga, Reiki, and Eastern meditation. Those who affiliate and those who do not, Drescher argues, hold a wide range of beliefs and practices in which there can be a lot of overlap and we often find ourselves in the pews or on yoga mats praying together or out in the community working side by side to care for the world and its people.

Somes and Nones also have a similar sense of what grounds them spiritually. In a survey completed by more than a thousand Somes and Nones, both groups ranked “enjoying time with family,” “enjoying time with friends,” “enjoying time with pets,” and “preparing or sharing food” as their “most spiritually meaningful practices.” Among conventional religious practices, only prayer made it to the top of the list, coming in at number five behind what Drescher has come to call: The Four F’s of Contemporary American Spirituality: Family, Fido, Friends and Food. At the bottom of the ranking for both the affiliated and unaffiliated were those things most measured by pollsters: “attending worship” and “studying sacred scriptures.” Drescher believes that it is the connection between the sacred and daily life that people seek most deeply. Spiritual Nones, however, believe they can cultivate that connection without it being mediated through the teachings and rituals of institutional religion.

Drescher’s research among former Mainline Protestants in particular found that they often viewed the church positively as a place of moral and ethical formation in their youth, but did not feel a need to have those teachings reinforced by church membership as adults. The following story is typical of stories Drescher heard from people from Mainline denominations:

Former Lutheran, Priscilla Danford, a 19 year old college student in Chicago who described herself as “just spiritual” talked about a series of summer mission trips – one to New Orleans, one to Kentucky, one to Guatemala – as ‘probably the most significant things I ever did.’ She also described a number of youth group projects that she found meaningful, and reported that she still had a number of close friends from youth group. All of that, she told me, “really helped make me who I am now and kind of laid out the person that I want to be in the future.” But she didn’t see church affiliation or participation as necessary for that.

Those of us serving in campus ministry live in the midst of the reality that Drescher describes in Choosing Our Religion. As our colleague, John Lund, noted in a recent Facebook post to the ELCA Campus Ministry Staff page:

…it has also become clear to me more than ever that our core group of students barely identify as Christian and that the students and young adults who we mostly are trying to connect with often don’t identify as Christian at all any longer. Yet, they are wanting for community, justice work, and spiritual grounding of some sort. Some are wanting a reclaimed Christianity, and others can’t imagine what that might even look like. Often, they want to work for me and be part of our organizing and advocacy work. If I am open to it, we can bring on some really dynamic, passionate, and committed people to do great service/justice/ and advocacy work. They are just not Christian.

Choosing Our Religion perfectly describes these young adults who might want to work alongside us, but not fully claim our Christian identity. But it leaves those of us who lead in the church to wrestle, as John did, with the question of our deeper purpose. Drescher’s research makes it clear that many of the things our campus ministries offer to draw in Nones – supportive communities, shared meals, open theological exploration, and opportunities for social justice work – can ultimately be found in other places and are not binding. So reading her book made me have to acknowledge that the only thing we have to offer that would make someone choose to identify and keep practicing in a Christian community is the feeling that they are being ever more deeply grounded in the God of Jesus Christ and that this relationship is life giving and world altering for them. And I have been doing a lot of reflecting on what causes my students and I to be hesitant to lead from our relationship to God versus the things that relationship has taught us to value. Overall, this book has made me want to have a lot of conversations with all of you about whether we are okay with people choosing their religion and just stopping by our ministries to gain what they can on the way or if we feel that we can shape a Christian and Lutheran practice that might blow the walls off anything people are shaping on their own and what that might look like.